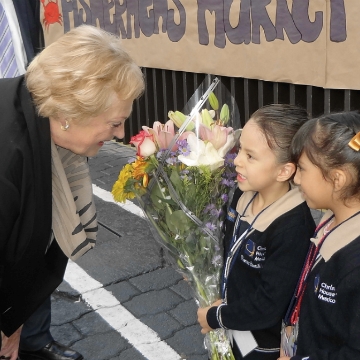 Christel DeHaan, emigrated from Germany to the United States in 1962, and was an accomplished businesswoman, community leader and philanthropist.  As co-founder of Resort Condominiums International (RCI), she is widely known for her contributions to the travel and tourism industry.  Under her leadership, RCI grew into a global enterprise with offices in 38 countries.  She sold RCI in 1996, and from that time forward, devoted her time, energy and financial resources to philanthropy.

A proponent of social responsibility, Christel founded Christel House International in 1998 as a way to deploy her resources and business skills to cause transformation and intergenerational change.  The Christel House locations were selected as her way of giving back to countries that played a significant role in her commercial success.  By covering all of the organization’s administrative and fundraising expenses, she assured donors that 100% of their donations will go to programs benefitting students. Thanks to Christel’s careful planning, the work of Christel House will continue to be supported through funding from the Endless Success Foundation, an organization created by her estate. It was her wish that all Christel House general and administrative expenses be covered in perpetuity. This allows all donor investments to continue to directly serve the programs and services needed by Christel House students.

Christel was driven by a passion for excellence, and as a result Christel House is widely recognized as a charity operating with the highest degree of accountability and effectiveness.

In addition to her work and devotion to Christel House, Christel was known for her generosity to the arts in central Indiana, and served on numerous local and national boards. Her accomplishments in the corporate, educational and philanthropic sectors earned her numerous awards and recognition.  She received three honorary doctorate degrees—from Marian College (now Marian University), the University of Indianapolis and the University of Nottingham, England.

Christel DeHaan lived by a simple philosophy – to care, to share, to make a difference.